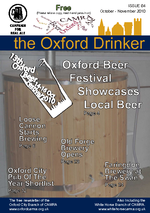 In previous years The Brewery Tap in Abingdon has been able to claim the accolade of being the only Good Beer Guide pub in Abingdon. This year however, it is joined by the Stocks Bar (at the Crown & Thistle Hotel) in the latest edition of the guide which was published last week.

The Brewery Tap has been in the guide for several years being known for consistent good beer quality and a traditional pub environment. The stocks is a well deserving newcomer this year having introduced a large range of real ales and being one of the first pubs in the area to be awarded Camra LocAle status.

The Cherry Tree in Steventon which is about 3 miles South of Abingdon has also made the grade. I’m afraid I don’t get down to Steventon often enough so can’t really comment on this.

Congratulations to them. Entry into the Good Beer Guide can only be achieved by being a good pub that serves good beer.

There were several other pubs in Abingdon on the shortlist this year, but unfortunately the book only has a finite size and the Oxford branch is only allowed a set number of entries for its area. For more information on other pubs in Abingdon, I recommend picking up a copy of the Oxford Drinker (for free at most good pubs in the area) or downloading it from the Oxford Camra web site, which has been doing a series of articles surveying every pub in Abingdon over the last 3 issues.

To find out more details then buy the Good Beer Guide 2010. I have seen copies in Mostly Books [please support your local shops], or it can be bought directly from Camra, or you can buy it at the Oxford Beer Festival between October 15th-17th.

The Good Beer Guide is an annual publication by Camra (Campaign For Real Ale), which was set up to prevent British Beer heritage from being destroyed in the 1970’s by large brewers replacing real ale with bland low quality keg beer and global lager brands. This campaign has been a success, with Britain now having more breweries than any other country, and real ale consumption seeing an increase in an otherwise declining industry and economy.

Entries in the Good Beer Guide are decided by local Camra branch members. A short list is made based upon ratings of beer quality during the year. Camra members can enter ratings for any pubs they visit during the year. The final choice for pubs from the Oxford area are made by a vote from Camra members at one of the monthly Oxford Camra branch meetings. To be in the guide requires a consistent quality of beer throughout the year.

If you want to help influence what pubs go into next year’s edition, then consider joining Camra. If you are already a member then please come along to branch meetings or social events.